Laryngospasm is a Life-Threatening Emergency

One of the more frightening events in anesthesia is laryngospasm – the protective, reflex, spasmodic closure of the vocal cords that occurs when the vocal cords are stimulated. When laryngospasm occurs, vocal cord closure can be so forceful that it can prevent all ventilation or even the passage of the endotracheal tube. Life-threatening hypoxia can quickly follow. Other potential complications include post obstructive pulmonary edema, and possibly even cardiac arrest.

Although it can occur in the awake patient — the choking, high-pitched stridor and struggle to breath you experience when you aspirate water is a good example— laryngospasm is most dangerous when it occurs in a semi-conscious patient. Semi-consciousness produces a state when airway protective reflexes are hyperactive and the reflexes to turn them off are poorly operative. Semi-consciousness is present in Stage II of an anesthetic during both induction and emergence, which is why laryngospasm is so common in anesthesia. Patients suffering from head trauma or heavy sedation are also at risk.

A quick review of movement of laryngeal muscles will help us understand why laryngospasm can prevent ventilation. There are 3 major types of laryngeal movement.

CHANGING TENSION OF THE VOCAL CORDS 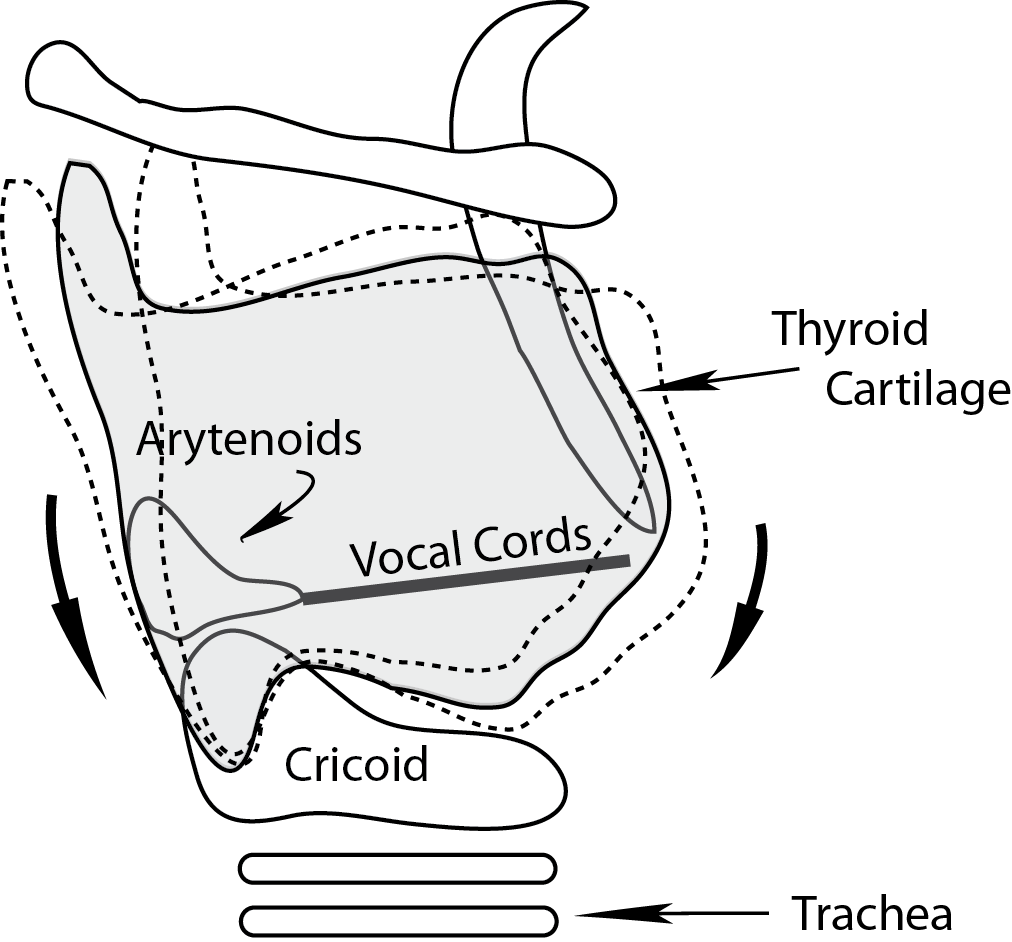 Laryngeal movements affecting tension of the vocal cords. Anyone Can Intubate, 5th Edition

Movement affecting the tension of the vocal cords, like the pitch of the voice, occurs by rocking the thyroid cartilage backward and forward on the cricoid cartilage at the cricothyroid joint.

One only has to listen to a singer to realize the dynamic control of pitch that changes in vocal cord tension produce.

OPENING AND CLOSING THE VOCAL CORDS

Movements that swing the vocal cords open (abduction) or closed (adduction) occur by swiveling the arytenoid cartilages on the back of the cricoid ring. Our vocal cords pivot constantly during the breathing cycle: opening during inhalation, closing into a slightly separated rest position after exhalation. During forceful inspiration or during hyperventilation, the cords open widely, producing an oval shaped opening. This minimizes resistance to breathing.

Movements which open and close the vocal cords. From Anyone Can Intubate, 5th Edition

CLOSING OFF THE LARYNX 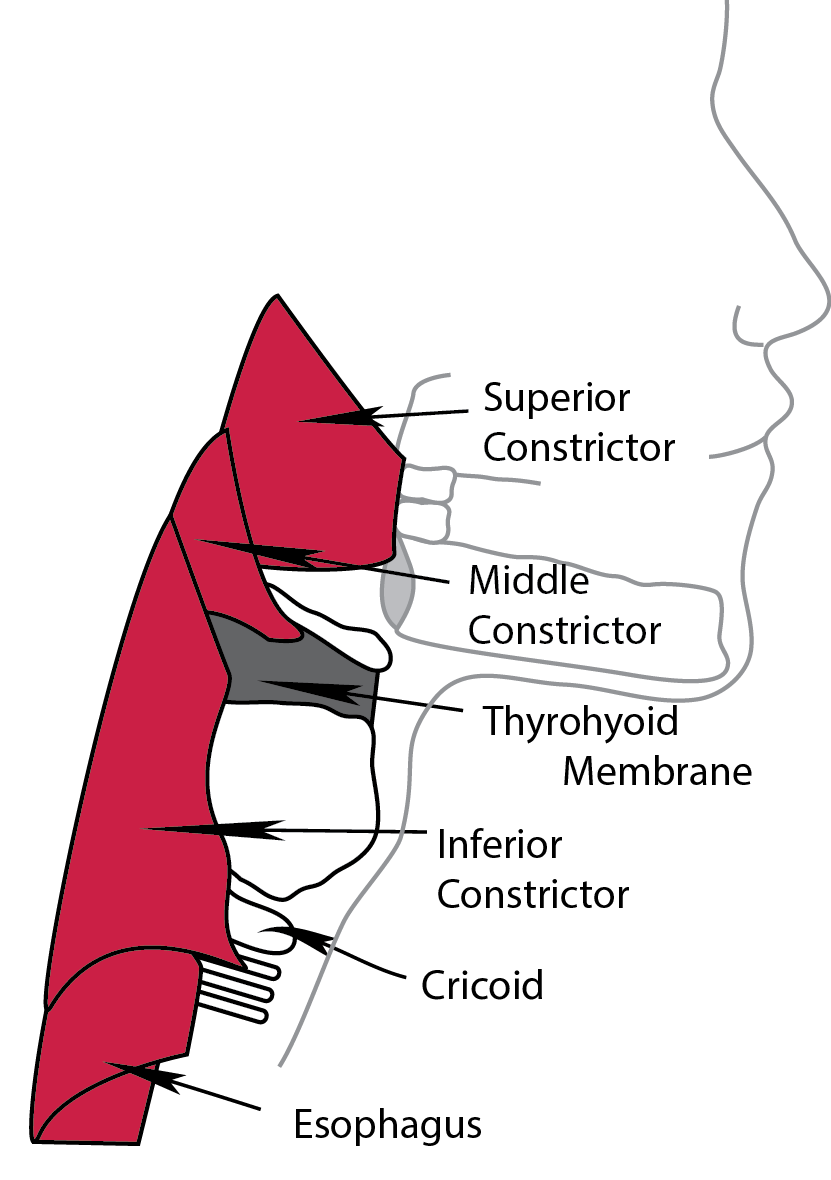 Extrinsic muscles of the larynx. From Anyone Can Intubate, 5th Edition

Movements that close off the top of the larynx protect it during swallowing or from aspiration.

Muscles, called extrinsic muscles, which move and support the larynx within the neck, surround the outside of the larynx. This up and down movement of the larynx helps function. For example, during inspiration, the entire larynx falls downward in the neck, a movement that pulls the epiglottis up and away from the glottis, further opening the airway.

During coughing and swallowing, the larynx rises in the neck. This higher position causes the epiglottis and the back of the tongue to drop downward over the glottis, closing it off. In this video you can see the upward laryngeal and epiglottis movement during swallowing.

Place your hand on your larynx as you breathe and swallow to feel these up and down movements. 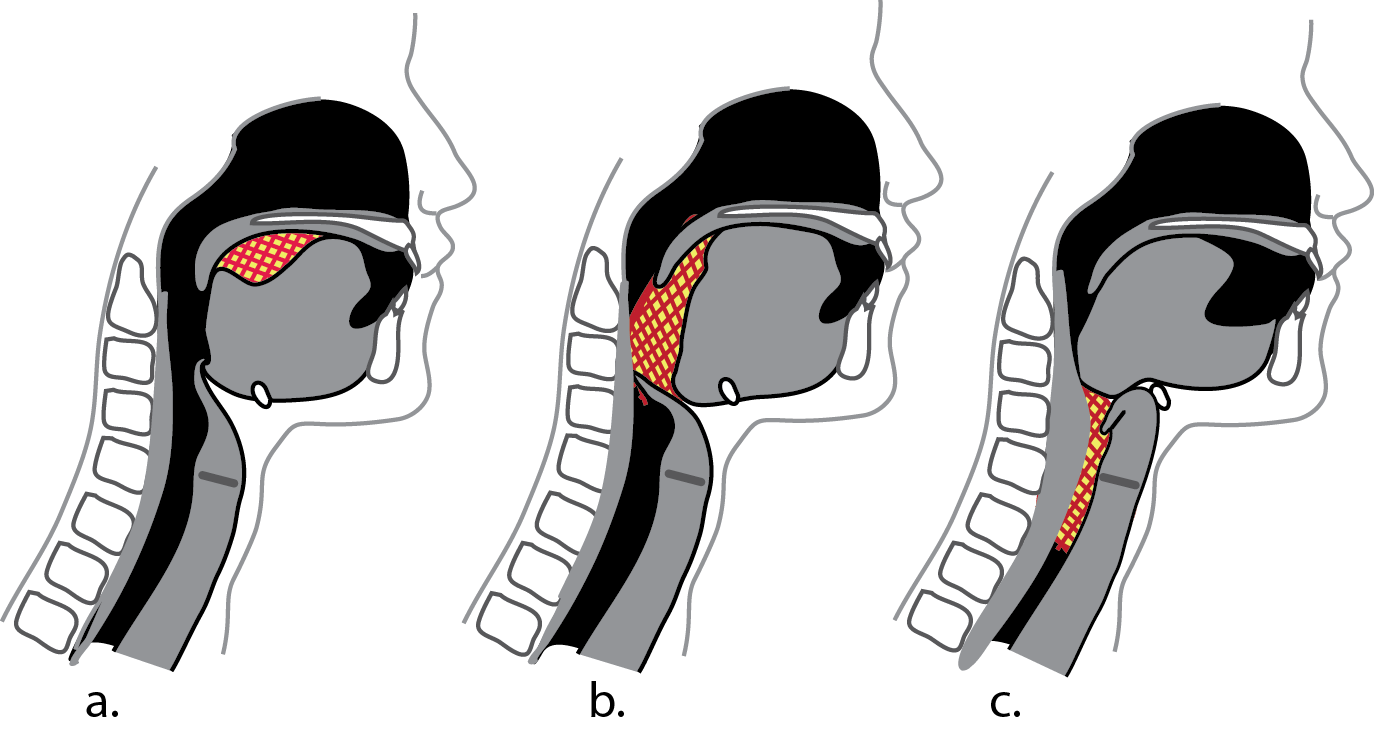 Swallowing is a complex coordinated series of movements. From Anyone Can Intubate, 5th Ed.

Laryngospasm in anesthesia is most likely to occur  when secretions, mucus, blood, or instruments such as a laryngoscope, in the airway stimulate the vocal cords of a patient who is lightly anesthetized. One of the most common times for layrngospasm to occur is after extubation if the endotracheal tube is removed during Stage II when reflexes are hyperactive, instead of while more deeply anesthetized or while awake.

Avoiding vocal cord stimulation when the patient is lightly anesthetized can usually prevent laryngospasm. However, laryngospasm can occur even with the best of care, especially in patients with irritable airways such as those with asthma, COPD, smokers, and with upper or lower respiratory infection.  Laryngospasm can be obvious or subtle, but always has signs of airway obstruction.

If laryngospasm is complete, then there is chest movement but the airway is silent. Without air movement there is no stridor. The bag doesn’t move. No ventilation is possible.

The larynx on the left has relaxed vocal cords (a). The one the right is the same larynx in laryngospasm (b). In between these two images, the endotracheal tube touched the vocal cords in a patient who was too lightly anesthetized, triggering the laryngospasm.

Laryngospasm: involuntary reflex closure of the vocal cords is seen on the right in b. From Anyone Can Intubate, 5th Edition

You can see closure of the larynx occurs by four mechanisms:

It’s no wonder it’s hard to ventilate a patient in laryngospasm. Click here for a short video demonstrating these muscle movements and showing active laryngospasm.

Once the reflex is triggered in a semi-conscious patient, it often persists for a dangerously long time because the part of the brain that would normally  turn it off is “asleep”. Getting the patient out of stage II will break the spasm. This can be done either by deepening the anesthetic (with gas or IV agents) or allowing the patient to awaken to the point where the reflex stops itself. However, hypoxia can develop quickly. If the spasm isn’t broken, this hypoxia can lead to cardiac arrest. Waiting out the spasm usually isn’t an option.

To break laryngospasm, first stop stimulating the vocal cords. Suction the airway. Sometimes simply removing the object that touched the vocal cords or the secretions is enough to break the spasm.

Alert your colleagues and ask for help. Direct all efforts to delivering oxygen. Apply your ventilation mask tightly against the face, and provide a continuous positive pressure breath with your ventilation bag while performing a jaw thrust. The jaw thrust is important. Thrusting the jaw forward:

All of these actions are directed at creating a gap between the vocal cords. Once you have that gap, then the positive pressure breath forces oxygen below the cords, pressurizing the larynx below the cords and forcing the cords further apart, usually breaking the spasm.

If the spasm doesn’t break, a small dose of sedative drug such as propofol may be needed. This deepens the level of anesthesia and usually stops the spasm.

If sedation doesn’t break it, then you may need a small dose of short acting muscle relaxant such as anectine to restore the ability to ventilate. You don’t need a full dose: about 20% the intubating dose will usually break the spasm and allow ventilation. The patient can breathe after this small dose but will be very weak and need ventilatory assistance until it wears off. Just remember, if reversal of muscle relaxant has been given prior to this dose of anectine, that reversal agent will prolong the anectine block, making it long acting. Reassure the awaking patient since such weakness will be frightening.

The time between onset of laryngospasm to hypoxia to bradycardia to cardiac arrest can be a matter of minutes, especially in small children. If laryngospasm is not breaking quickly with positive pressure alone, to not delay further treatment.

Avoid stimulating the vocal cords in a semiconscious patient. Extubate either awake, or in a deep plane of anesthesia – not semiconscious Stage II. Always ensure the pharynx is clear of secretions, especially before extubation. Be vigilant, be prepared and react quickly if it occurs. And never hesitate to ask for help.

May the force be with us 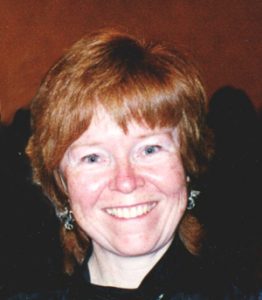